It’s been 3 weeks since I last posted here. I have been very, very busy the past holiday season. I took advantage of the long vacation to have great moments with my family.
Year 2010 was good, maybe not so much financially but I am thankful for the reconciliations and unity in the family. For the past fifteen years my Tito Ben, Mom’s youngest brother, has been separated from his family because of some reasons that was too personal to post here, besides I do not have any permission to post his family’s story. His wife died last month and their only daughter Charlene was left to her mother’s relatives in Batangas where they are residing. After fifteen long years, Charlene finally had the courage to look for his lost father whom she hasn’t seen since she was born. She traveled from Batangas to Cavite to hug and kiss Tito Ben for the first time. A touching scene that I thought happens only on television dramas. 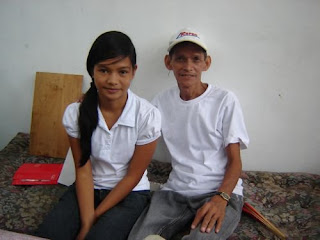 Charlene and Tito Ben
Last December 26, 2010, the Bungalon clan had a reunion to welcome Charlene in the family. She is a pretty girl that looks exactly her father, the eyes, nose, lips, every inch of her face. I was happy to see Tito in good mood, smiling and in clean white shirt. He was so inspired. I know he did not expect for that moment to come but it did. I hope that is it the start of a new beginning for Tito Ben and Charlene. So many moments to catch up but it is not too late to make new good memories. GOD is so good and everything happens in HIS own time like this reconciliation and new beginning for Tito Ben and Charlene.
Spread the love