Last week Rhonnel and I went to RJ’s school to get her card or else the teacher will not give the card. It is good that we are obliged to go to school once every quarter to know how our girl is doing in school. So far, she is doing very well in all subjects. Her teacher’s only complaint is she is becoming talkative. I know exactly where she got that trait…from ME! Rhonnel is silent type while I like to chit-chat.

I remember when I was in Grade 1 my teacher pulled my ear. Grade 2- I was asked to leave the line during the flag ceremony because I was noisy. Grade 3- I was called in principal’s office together with my other classmate. Whew!

Back to RJ, her teacher said sometimes RJ is not focusing because she is talking to her seatmate. With grades like these, I do not think that is much of a problem. 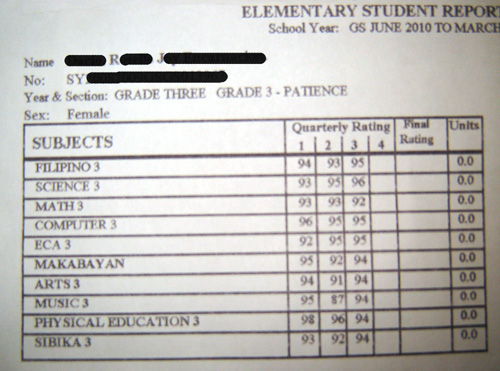 As parents, we are trying our best to raise the perfect children but sometimes they turned out other than what we expect. We want them to behave but they do what they want, whining, running, etc. I think it is not how we are molding them but it is the genes that have big role in shaping their personality and intelligence. According to David B. Cohen, University of Texas psychologist, approximately half of the genes from parents are passed on to the child in random process. So that explains RJ’s character…intelligence from Rhonnel and chattiness from me. =)