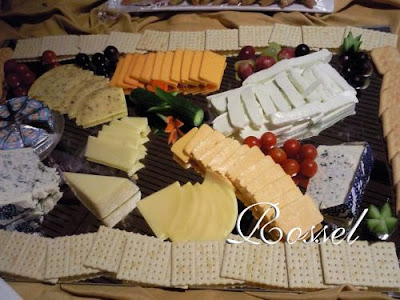 Cheese is a generic term for a diverse group of milk-based food products. Although most cheese is produced from cow, sheep, or goat’s milk, it can and has been made from a plethora of milk-producing animals. A farm in Bjurholm, Sweden actually makes moose cheese. You can hardly estimate how many kinds of cheeses there are in the world. Cheese varies from place to place depending on the animal grazed there, the quality of grass the animals eat, the qualities and condition of the animals milk, the process of making, the method and extent of curing, the butterfat content, the acid, the bacteria and mold.

Cheese may be divided into two classes, hard cheeses, which improve with age under suitable conditions, and soft cheeses, which are usually not used for cooking.  Most soft cheeses should be used within a few days of purchase–they spoil faster than firmer cheeses.

Whatever kind of cheese it is, it is good as spread on bread or crackers to be served as snacks.
“A cheese may disappoint. It may be dull, it may be naive, it may be over sophisticated. Yet it remains, cheese, milk’s leap toward immortality.”
~ Clifton Fadiman ~
Spread the love